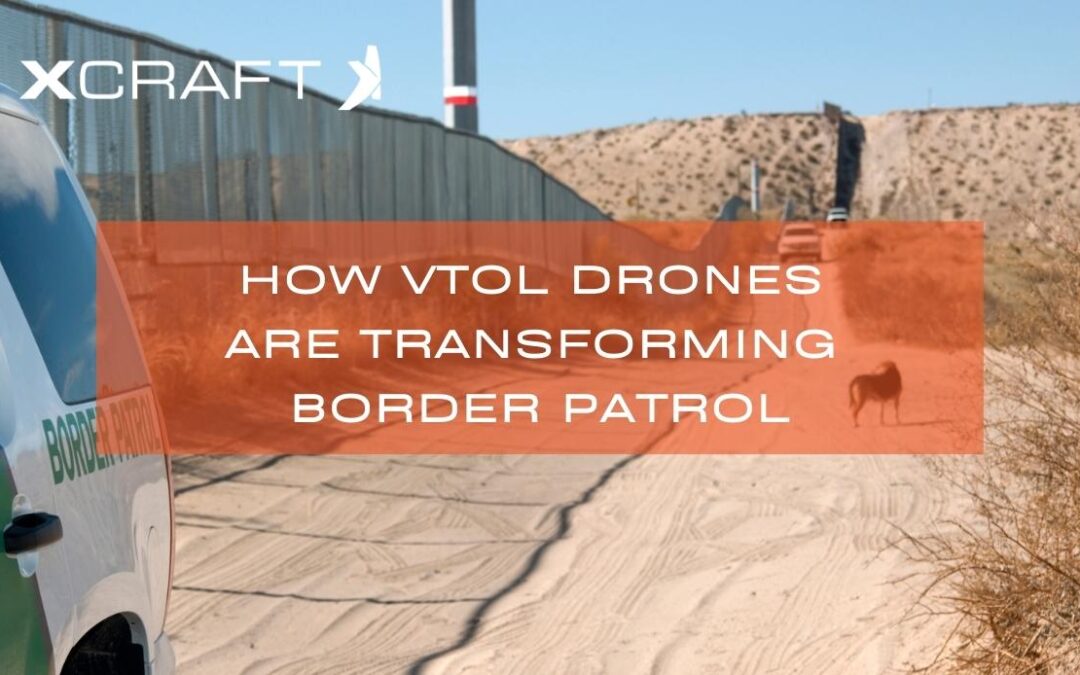 Vertical take-off and landing (VTOL) drones are and have been altering border patrol practices in a significant way. Unmanned aerial vehicles (UAV’s) are demonstrating their utility as the way of the future for border patrol, allowing agents to:

Drones are a Game-Changer for Border Patrol

Maintaining border security presents unique problems, particularly when a border is extremely long and lacks sufficient physical security barriers. The United States has over 6000 miles of land border, separating the U.S. from Mexico in the South and Canada in the North. Under these conditions, drones offer a solution to the most challenging issues agents face in the field, particularly at the U.S. southern border.

Although the U.S. first implemented unmanned aircraft for stateside border patrol in the early 2000s, the drones in operation today have evolved significantly from earlier devices, giving Border Patrol additional tools to carry out what is becoming an extremely difficult mission.

Originally, what people called “drones” were more like small unmanned airplanes, and could only take off horizontally. Although still very useful, they lacked the capability of hovering and changing direction quickly.

In contrast, VTOL drones such as the UAV’s designed by xCraft are versatile and offer excellent maneuverability. Multiple rotors make these drones capable of moving in all directions effortlessly, and unlike horizontal take-off and landing drones, they require minimal space for deployment. Border Patrol units can utilize vertical take-off and landing drones in the following ways.

When individuals cross the border illegally, chasing them on foot isn’t always feasible, particularly in the south where they can virtually disappear into Sudan grass–a grass that is 7 to 8 feet high and grows densely in the arid deserts of the U.S. southern border. Drones allow border agents to get a birds-eye view of the area, and identify and monitor their movement in real time.

VTOL UAVs equipped with high-resolution cameras can easily identify and track border trespassers as they move, and get an idea of what sort of trespassers they are – whether they are drug smugglers, for example. When equipped with thermal imaging cameras, they can even identify and track them at night. This enables on-the-ground Border Patrol agents with the ability to anticipate where trespassers will come into the clear, as well as anticipate what they are likely to encounter at the point of interdiction.

Camera-equipped UAVs also enable Border Patrol officers to find and identify border crossers already in the country, even if they were able to cross the border undetected.

At one time, Border Patrol officers were routinely dispatched to investigate sensors that had tripped along the border. The problem is, by the time an agent would arrive, it could be too late for interdiction. Moreover, there was often no way to determine whether the sensor was tripped by a legitimate breach, by a wild animal, or by some anomaly.

Drones can address these problems. Unlike agents dispatched in vehicles or helicopters, agents can now have a drone deployed almost immediately and are able to fly at high speed in a direct line to reach any point along the border within a matter of minutes. Drones are quick and energy-efficient, and multiple drones can be deployed to multiple locations day or night, making the Border Patrol less dependent upon having available manpower resources.

UAVs can be used to investigate suspicious activity observed on stationary cameras, and they give single agents the ability to do the work that used to require multiple agents.

Tethered drones like xCraft’s Shadow or Panadrone are commonly used for surveillance purposes, but vertical take-off and landing drones are also excellent at securing large areas. Free-flying drones can be programmed to fly a specific route and capture video footage of everything occurring within the selected location.

UAVs work well in areas that are difficult to monitor using stationary cameras due to foliage or terrain. Individuals also have difficulty tampering with drones compared to traditionally mounted cameras. Equipping surveillance drones with thermal imaging technology allows them to be used day and night for surveillance purposes.

Using UAVs, border patrol agents can increase their situational awareness in areas with dense foliage. Instead of having a limited sight range due to trees and brush, drones allow agents to take in a scene from above. This shift in perspective minimizes the chance of an agent being ambushed or coming unexpectedly across a border crosser and enables them to approach a situation fully informed of what they will encounter.

The fact is, VTOL drones have revolutionized the way Border Patrol agents can do their jobs, and we anticipate finding even more benefits of UAVs for carrying out Border Patrol operations. For more information, reach out to xCraft today and see how our VTOL drones can improve your unit’s performance.